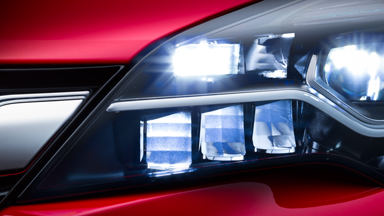 Rüsselsheim. The intelligent lighting system of the future will make its premiere in the new Opel Astra generation at the International Motor Show in Frankfurt (September 17 to 27, 2015). With the new Astra, the ground-breaking full-LED matrix light IntelliLux that enables driving with glare-free high beams will be available in the compact class for the first time, making top-of-the-range lighting technology accessible to the largest audience ever. After having introduced bi-xenon adaptive lighting in the current generation Astra, Opel again takes on a pioneering role in lighting technology with its next compact bestseller.

“We are democratizing technology by making innovations affordable and bringing them to high volume vehicles. Our new LED matrix light, IntelliLux, is a perfect example. With the introduction of this lighting technology to the Compact Vehicle Class, Opel is the first automaker to offer this highly efficient and high performance lighting system in this segment. Our integration of the LED Technology provides outstanding night time performance enhancing safety for the driver and those around them,” says Charlie Klein, Vice President Vehicle Engineering at Opel.

Bright as day: High beam lighting for driver without dazzling other road users

After having already made bi-xenon adaptive lighting more affordable and available in most of its models, including the current Astra, of which more than 200,000 have been sold with the system, engineers at Opel’s International Technical Development Center in Rüsselsheim turned their attention to developing, enhancing and fine-tuning the lighting system of the new generation. After years of preparation Opel’s new, patented IntelliLux full-LED is now ready to go into production. To date, this type of system has been reserved for upmarket vehicles in the luxury class. Opel will introduce it in the new Astra generation making its premiere at this year’s International Motor Show (IAA) in Frankfurt in September. This was possible with intelligent solutions and the latest generation of LEDs, which provide bright illumination, close to daylight.

Consisting of 16 LED segments – eight on each side of the vehicle – the new LED matrix system automatically and constantly adapts the length and distribution of the light beam to every traffic situation. In the process, it works with the Opel Eye front camera that, for instance, detects the presence of other vehicles in motion so that the individual LED segments that would dazzle oncoming drivers are automatically switched off and on.

As soon as the vehicle exits urban areas, the high-beam lighting is automatically switched on – and it always remains on. This leads to a considerable increase in safety, as confirmed in a study conducted by the Technical University of Darmstadt and the European LightSightSafety Initiative. The study shows that at driving speeds of 80 km/h, drivers detect objects at the side of the road around 30 to 40 meters sooner than with conventional halogen or xenon low beam lighting. This gives them around 1.5 seconds more time to react, for instance when animals suddenly cross the road.

Not only Astra drivers benefit from this – while they enjoy excellent light and visibility conditions, they do not dazzle other road users. When the camera detects light sources from oncoming or preceding traffic, individual LEDs in the relevant zone are deactivated, simply “cutting out” the area around the vehicles. The rest of the road and its surroundings remain brightly illuminated. With this degree of precision and adaptation, LED matrix light elevates lighting technology to the next level.

Opel lighting engineers have not made an intelligent, full-LED system more affordable, they have also taken it to a new level of intelligence. As not all Astra customers will opt for an imbedded navigation system, the lighting system needs to be able to recognize if the vehicle is in an urban area or on a highway for instance independently. The IntelliLux system in the Astra will be the first matrix light system that continuously optimized in a series production car without being linked to the navigation system. In addition to the many automatic low and high beam pattern variations, IntelliLux LED also provides a special highway light mode that further increases safety at night. And a special welcome light function makes entering and exiting the Astra more comfortable in the dark.

The LED matrix light’s high efficiency brings added safety and comfort. Not only does the system illuminate the surroundings brighter than conventional lighting systems, it also has a considerably longer running life than headlamps with halogen or xenon lamps. Another advantage is that mechanical movements are no longer necessary in the headlamp – the individual LED segments turn on or off according to the situation, which also contributes to a durability that far exceeds the lifespan of a car.

Last but not least, the new lighting system has also made the designers very happy. Before, the size of the headlamps’ housing mainly depended on the most expensive technology it protected, but now the base lamp determines the visible part of the headlamp. Thanks to the small LEDs used in the matrix light, in future, the lamps can be designed more finely and delicately; mechanical, complicated control units that require a lot of space and optically oversized housings are thus outdated.